I am Professor of Language and Literacy and now 'Life President' of the Lancaster Literacy Research Centre www.literacy.lancs.ac.uk. I am currently interested in all aspects of language online, including the interaction of words and images, multilingual issues, changes to vernacular practices and learning. Most recently published a co-written a book based on our ESRC project on Academics Writing. I am also writing about methodology, especially ethnographic approaches to literacy research. Also language and photography.

The book Researching Language in Social Media by Ruth Page, David Barton, Michelle Zappavigna and Johann Unger was published by Routledge in 2014.

The book Language Online by David Barton and Carmen Lee was published by Routledge in 2013. A Portuguese translation was published in 2015 by Parabola Editorial.

The book Local literacies by David Barton and Mary Hamilton was re-issued in 2012 as a Routledge Linguistics Classic with a new overview chapter.

The Anthropology of Writing: Understanding textually mediated worlds edited by David Barton and Uta Papen and published by Continuum is now available in paperback. Download the first chapter.

I enjoyed writing a paper on being stranded by the volcanic ash cloud in April 2010: Barton, D. (2011) People and technologies as resources in times of uncertainty.Mobilities,6(1) 57-65.

My book Literacy has been published in Greek by Papazisi publishers, Athens and was published in Korean by Honsei University Press in 2014.

And a couple of other recent papers:

My Literacies book series with Routledge is thriving, the latest volume being Digital Literacies by Julia Gillen.

All aspects of language online, including the interaction of words and images, multilingual issues, changes to vernacular practices and learning. 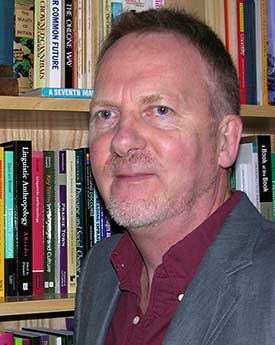