86 million workdays lost to migraine in the UK every year

Migraine costs the UK economy £8.8 billion per year in lost productivity, a new report by the Work Foundation reveals.

The equivalent of 86 million workdays are lost to migraine each year and close to £1 billion is spent on healthcare costs associated with the condition. It affects more than 23 per cent of adults with almost 200,000 attacks happening in the UK every day - making migraine the most common neurological reason for accident and emergency attendance.

Launched this week in the Houses of Parliament, the new report is the first to examine the economic cost of migraine in the UK since 2003, and calculates the impact migraine has on productivity levels due to ‘absenteeism and presenteeism’ - either being absent from work or less effective while at work.

The report, Society’s headache: The socioeconomic impact of migraine, was produced by the Work Foundation and funded by Novartis. It calls for Government to join forces with national bodies to develop a long-term strategy to improve migraine care and support for employees in the workplace.

The Work Foundation’s Dr James Chandler is the lead author of the report. He said: “Migraine is the most common and disabling headache disorder which affects more than 20 per cent of adults in the UK. It tends to affect people between the ages of 15-49, so strikes at a time when people are at their most productive, impacting on their careers, family life and with it, the wider economy.

“Despite its prevalence and debilitating effects, public and professional understanding of it is generally poor and it is often badly managed by the health system. The condition is normally treatable if managed correctly, so we are calling for Government to introduce measures to improve patient care and increase understanding of the condition. Employers also have a role to play. Better working practices – promoting ‘good’ work – would empower people to manage their condition more effectively at work, reducing the impact on individuals’ careers and significantly improving productivity.”

The report also suggests there are significant additional costs that are more difficult to quantify, as sufferers can deal with difficult symptoms such as anxiety between episodes that can impact on people’s relationships and quality of life. Research suggests the condition is often linked to limitations in career advancement and potential earnings.

The report was produced as a result of in-depth interviews, as well as analysis of the Global Burden of Disease Study, the Labour Force Survey and Public Health England Hospital Episode statistics. 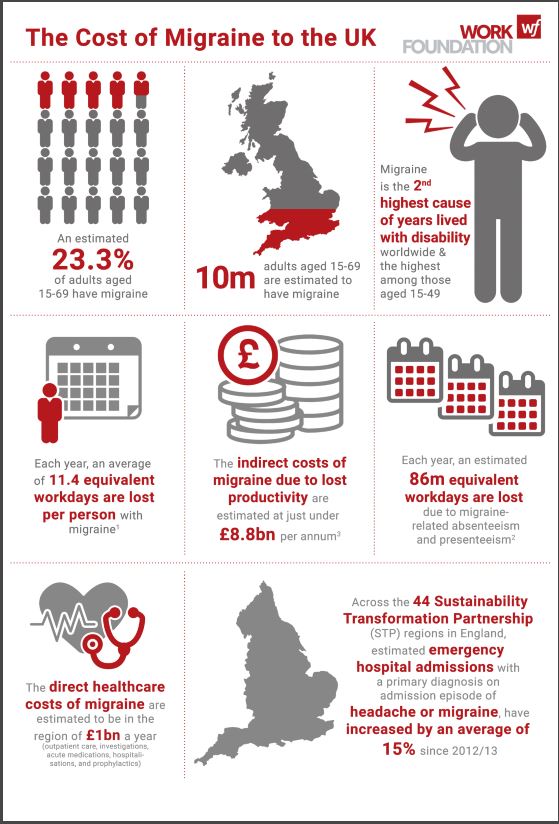