Alex Marland (PhD Politics,2005)  talks about winning one of the most prestigious literary awards.

"The Donner Prize is among the biggest and most prestigious literary awards in Canada, to the point that many people simply know it as 'the Donner.' On May 15, at a ceremony in Toronto, it was awarded to the best public policy book by a Canadian. The winner receives a bronze statue, a framed certificate and $50,000 (which is about £29,000). To have my book make the Donner shortlist was an honour; to actually win is still an achievement that I am trying to process. It is great news for those who study the subfield of political marketing generally.

Brand Command: Canadian Politics and Democracy in the Age of Message Control discusses the message coordination that political parties and leaders exert over parliamentarians and election candidates. The book focuses on Canada, but the findings are relevant to parliamentary systems of government worldwide, including Britain. The introductory chapter takes cues from British politics and comedy, including the BBC’s brilliant series The Thick of It, where Peter Capaldi’s spin doctor character Malcolm Tucker controls communications on behalf of the prime minister. Taking its cue from that, Brand Command makes a persuasive argument that communications control penetrates government and politics, with significant implications for parliamentary democracy.

Being awarded the Donner Prize would not have happened without Lancaster University. From 2001 to 2005, I completed a PhD in what was then known as the Department of Politics and International Relations. I attended Lancaster with plans to study constituency campaigning under Professors David Denver and Gordon Hands. It was the only university that I ever considered attending for PhD studies – their reputation and that of the University were just that good. My research evolved into studying political marketing, and the relationship between political parties and candidates during elections. If it weren’t for Lancaster University or Professor Denver in particular, I wouldn’t have gone on to become a professor at Memorial University of Newfoundland, and Brand Command would never have been written. Indeed, the basis of some content of Brand Command originally appeared in my Lancaster PhD dissertation.

It is funny how things stay with you. I have a poster of Lancaster on my wall at home and regularly use a Lancaster University keychain. Often during the Canadian winter I reflect fondly about the rabbits and flowers around the university campus. I keep in touch with my PhD supervisor, who has since retired. Altogether my time at Lancaster University was time well spent." 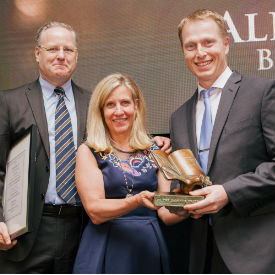 Altogether my time at Lancaster was well spent