Celebrating the 50th Anniversary of the University's First Rag Week

2016 marks the 50th anniversary of the University’s first Rag Week.

So why was it called Charities Week rather than Rag Week?

The students at Lancaster wanted to carry on the tradition of established universities in holding a Rag Week where students undertook various activities to raise money for charity.  At the time the public perception was that Rag Weeks, whilst raising money for deserving causes, were an opportunity for students to run amok and cause chaos in their local community.  So we decided that a softer image, which highlighted what we were doing, was more appropriate.

Was it very different from other Rag Weeks?

Not greatly.  We still did the usual things, street collections, a procession through the City, a Rag Magazine, Rag Ball, etc.  But we also included some new ideas, such as a fashion show, a football match and performances of King Lear by the University’s Theatre Group.  We also held the University’s first blood donor session for students.

How did you raise awareness of the events?

Well we used the traditional methods of local press, posters, etc.  But we also achieved major national publicity twice.  Firstly, the tabloids had a field day when a letter we had received from the Chancellor, Princess Alexandra, supporting and encouraging the Charities Week efforts, was withheld from the Rag Mag due to the Rag Mag’s content.  Rag Mag sales rocketed!  And secondly, one of the students, Chris Mountford, gatecrashed the Eamonn Andrews Show.  The show had viewing figures similar to the Jonathan Ross and Graham Norton Shows combined, so the Lancaster Charities Week had a huge following.

Was it a success?

Financially it was very successful.  Nearly £2,000 was raised for local charities.  Whilst the amount may appear small in today’s climate you have to remember that in 1966 student numbers were measured in hundreds rather than thousands and Rag Mags sold for two shillings, that’s ten pence in decimal currency!  The top starting salary for graduates was £1,000 per annum.  Equally importantly we also received very complimentary feedback from the City Council who acknowledged the ‘enjoyable and light-hearted activities that did not cause offence to the general public’ and the hope that the ‘Charities‘ Week would become an established part of City life’!

What aspects gave you the greatest satisfaction?

The efforts and commitments made by so many students in organising all the events and activities.   So many did so much to raise funds for local charities and the locals and City responded so well.

Were there any bad moments ?

Well, there was one embarrassing moment.  I was endeavouring to sell tickets for the fashion parade.  It was to be a black tie evening and I approached one well-dressed lady who I thought would be likely to be interested and said it was the sort of event she needed to be at as it was being opened by the Countess of Peel.  She smiled and said yes she ought to be there … as she was the Dowager Countess Peel! 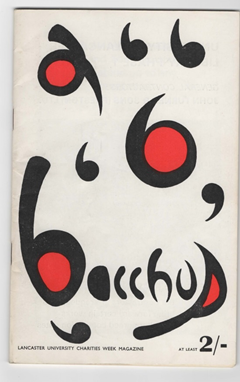