James Meller (Law, 2002, LLM International Law and Relations, 2003) talks about his studies at Lancasater and his current role in Ghana.

If anyone had suggested to aspiring barrister James Meller when he arrived at Lancaster University that, eight years later, he would be working for a social enterprise helping to develop the potential of talented West African children, he says he would not have believed it.

Now living in Ghana as Head of Education and Partnerships for the Right To Dream Academy, Meller acknowledges Lancaster’s role in broadening his horizons. He says: “It built up my curiosity about the world outside and brought me into contact with fellow students from all over the world.”

He has spent the last five years with Right to Dream, which provides scholarships and a development programme – combining football, education and character development – to talented, young West Africans.  The Academy’s graduates go on to establish professional football careers or further their education at college in the US – with the underlying goal that they will use their talent and position to positively impact their communities in West Africa in the future.

Brought up in Worcester, he was offered a place to study Law at Lancaster and was impressed by its ‘robust, well-thought-out programme with the opportunity to study a great variety of subjects.’  He was also attracted by the University’s location near the Lake District and by the collegiate system.

His initial intention was to be a barrister, so he relished the cut and thrust and the legal debating that was at the core of the Lancaster course.  He admits that he found the academic work and level of independent study challenging, but found the interactive and supportive approach of the tutors very helpful.

Lectures and seminars made up nine hours each week, with the rest of the time very much in his own hands: “Developing the self-discipline of background reading and research, writing up case notes etc, outside the core hours, was initially a challenge, but I quickly realised that I was acquiring skills that would stand me in good stead whatever I did later in life.”

Of a strong field of lecturers, Meller was impressed in particular by ethics expert, David Seymour, from whom he learned property law and jurisprudence.  He also became fascinated by human rights and human rights law, building on many discussions with his father on the subject over the dinner table in his teenage years.

His social life was sometimes as demanding as his studies. On the sports field he played rugby for Lonsdale.  And many hours and days throughout his time at Lancaster was taken up with the Lancaster University Theatre Group - as an actor and director in a number of productions, including Shakespeare’s Richard III; Arthur Miller’s The Crucible and Oscar Wilde’s The Importance of Being Earnest.

Despite his experience and confidence at public speaking and his enjoyment of his studies, he had decided before his finals that a career as a barrister was not for him.  He felt that he needed something to make him distinctive, he followed his growing interest in human rights and stayed on at Lancaster to do a Master's degree in International Law and International Relations.

Following the completion of postgraduate studies, he took some time to travel but was soon back in the UK and based in London where he gained a NCTJ journalism qualification securing his first job as a writer and researcher with the Chambers Legal Directory. This was in 2005 and around the time of the UK General Election.  Although James had never been involved in student politics, he volunteered to work for the Conservative election team as late night media monitor covering the highlights of the day’s news and circulating it to MPs and the then Shadow Cabinet.  This gave him an both an insight into the workings of Conservative Party HQ and, following a recommendation by George Eustice MP, a job as Parliamentary Researcher for David Cameron.  After three years working in Parliament for the future Prime Minister, he returned to Conservative Party HQ before the 2010 election as Deputy Head of Planning for the General Election.  During this time, he also helped to organise a number of small-scale development projects in Rwanda and Sierra Leone.

“I fell in love with Africa,” he says. “I wanted to do something I was passionate about and I wanted to be out there working.”

A friend put him in touch with the founder of Right to Dream, who he met in a London bar and a month later in December 2010 he left for Ghana. His first three years were spent managing Right To Dream’s Academy. He then took on a role as Director of Partnerships, allowing him to divide his time more equally between the UK and Ghana, but has now moved back out to Ghana full-time as Head of Education and Partnerships at the Academy.

The variety of his work is the best part of the Academy job for Meller, but his real enthusiasm is for the 95 students on scholarships at the Academy, who are seen as potential future leaders and role models.  He says: “They are incredibly talented human beings. To play a part in giving them the chance to see their talents developed to the full - that’s what motivates me every day.” 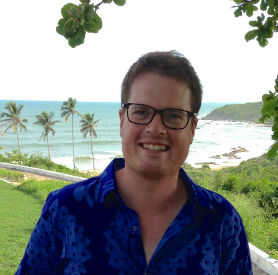