The term "lurg" is defined by urban dictionary as an "illness or disease that is difficult to shake off".

Some former members of LURG, the Lancaster University Revue Group, have found their comedic past equally hard to leave behind. LURG was a student comedy society, active at Lancaster between 1976 and (we think!) 1992. A well attended reunion at the University in April 2016 celebrated the group’s 40th anniversary. This has now been followed by a new web site, www.lurg.uk, which records and celebrates the group’s work.

During its existence, LURG mounted around twenty productions at the Nuffield Theatre and made several appearances at the Edinburgh Fringe. In its early days, it even put on three revues in the Chaplaincy Centre concourse. The new LURG web site hosts an extensive archive of facts and memorabilia, documenting many of those performances. The memorabilia collection includes numerous original photographs, programmes, production documents, publicity and reviews (both good and bad). Some esoteric memorabilia has been uncovered too, such as a charming letter from a Spar director granting permission to use their name in the group’s 1978 production, Spar Wars. This is reproduced on the site, along with several hundred other images.

Recordings of many early LURG performances have also been digitised, to create a substantial audio archive. Most of the group’s revues from 1976 through to 1980 are available to listen to on the site, as are a handful of early rehearsals and radio/TV interviews from URB/STS.

In addition to its role as a repository, the site has also been designed to directly involve ex-LURG members. Numerous options are provided, allowing visitors to contribute information or leave comments. A forum has also been included, where former members can connect and discuss all things LURG.

While much of the site’s initial content leans heavily towards the group’s early years, a conscious effort has been made to document LURG’s entire history. Some success has been achieved in identifying most of the group’s main performances at the Nuffield Theatre, along with a few clues regarding later visits to the Edinburgh Fringe. However, much information and material is still sought after, as summarised on the site’s "Wanted!" page and "Questions" forum.

Ex-members who can contribute LURG-related information, memorabilia, photos or recordings should visit www.lurg.uk or email info@lurg.uk. 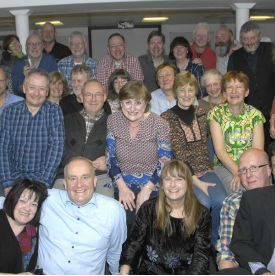 Ex-members who can contribute LURG-related information, memorabilia, photos or recordings should email info@lurg.uk.