From chartered accountant to chairman of a world-class distillery in the Lake District, Nigel’s career has demonstrated commercial success across the UK.

Nigel Mills graduated from Lancaster University in 1980, having studied Economics, Accountancy and Law at Lancaster University. He qualified as a chartered accountant in 1984 and a chance break two years later offered an opportunity to buy a business from a family friend. This was the start of an incredible journey that saw the Mills brand grow from 11 newsagents to a chain of 77 convenience stores and eight supermarkets from a strong base in North Tyneside and beyond to Sunderland, County Durham, Cumbria, Lincolnshire, Yorkshire, the Midlands and South Wales.

For 25 years up to March 2011, Nigel was Managing Director of Mills Group, a North East based business with more than £80m turnover plus additional service sales of £80m and 2,200 staff that continued to grow despite ruthless competition from multi-nationals and major changes to trading laws that threatened its existence. Nigel sold the group to Tesco in 2011, with groups’ One Stop stores running the majority of the original portfolio.

Nigel became Chairman of the Entrepreneurs’ Forum in 2012 having been an original founder member from its inception in 2002.  “We are fortunate to live and work in the North East, where entrepreneurial spirit is strong and those who lead businesses have a will to work collaboratively and support one another. Our ethos is to share the knowledge and experience of established entrepreneurs to support those who are started or developing high growth businesses.”

Around that time, he read a newsletter from a firm of architects in Carlisle that said they’d acquired planning permission to build a whisky distillery at the head of Bassenthwaite Lake, and thought, “Now that’s interesting,”.

In April 2012 Nigel met Paul Currie, who had obtained planning consent to build the largest whisky distillery in England located in an old Victorian model farm in the Lake District National Park, Cumbria. For Nigel, who had owned a successful 4 star hotel in nearby Cockermouth for the past 23 years, the opportunity to build a world class whisky distillery, together with tourist destination and food and beverage operation, was too good an opportunity to miss.

“For me the opportunity incorporated not just the distilling but also an element of tourism with the hotel in Cockermouth. I thought there was synergy.”

Fastforward to 2017, and The Lakes Distillery is a fully operational whisky distillery and tourist attraction with global vision and ambition. The distillery’s mantra “faith, hope, luck and love” has served them well so far. The distillery’s inaugural malt whisky is due out in 2018 which marks an exciting moment not only for The Lakes Distillery, but for the British craft whisky industry.

In Nigel’s words: “Everybody attached to this project has had a lot of faith to get us to where we are today. Hope is eternal. Yes, you need a bit of luck along the way, but if you don’t love what you do, then you drastically reduce your chance of success. Nobody works this hard, just for the money.”

Discover more about The Lakes Distillery at https://www.lakesdistillery.com/. 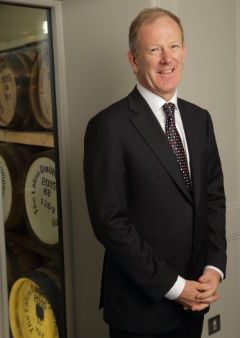 If you don't love what you do, you drastically reduce your chance of success