Dave Pickering (Creative Arts, 2003, Furness) tells how Lancaster gave him the opportunity to develop his craft as storyteller and performer.

When I arrived at Lancaster University in 2000 to study Theatre Studies and Creative Writing, I found a place where I could find and reinvent myself after years of being bullied at school. As well as beginning to learn my craft as a storyteller and story performer (although I didn’t know quite what that might look like back then), I also found a space to heal and grow. I was exposed to new ideas and influences that would go on to form some of the major themes of my work, but back then I was very much reacting to my experiences rather than finding ways to understand and contextualise them. But even though I didn’t explicitly think of myself as looking at memoir and masculinity in my work, unconsciously I clearly was.

In the middle of my first year, I co-founded independent theatre company, The Strangely Compelling. Our first production was a play I wrote called Seeing Double, which involved two overtly “laddish” men going on a bar crawl around campus. As the crawl went on, the audience became more aware that beneath the patriarchal masks of the main characters was a yearning to be a different, more authentic version of themselves. In the middle of the play, the protagonists were kidnapped and interrogated by two strange other-worldly characters, and through this process, they faced themselves. The play ended with the protagonists hesitantly looking towards a future where they would embrace themselves for who they were and discard the social codes they had thought, up until that night, they needed to follow. Lancaster University was the perfect setting for the play. The campus bars allowed us to produce an actual bar crawl experience, where the audience mirrored the characters and travelled around the university.

Since leaving Lancaster a couple of years after graduating, I’ve mostly been working as a podcaster and true storyteller. My work has been featured on BBC Radio 4 and BBC Radio 5 Live and recommended in The Guardian, The Independent and The Financial Times.

In 2015, I made a show called What About the Men? Mansplaining Masculinity, which mixes personal storytelling and analysis to discuss issues around masculinity, and performed it in London and Edinburgh. The show can be heard in full for free here. The survey it was based on is available as an open source database  here. In 2016, I was invited to make an episode of BBC Radio 4's Four Thought that extended and adapted the show. It was called Liberating Men and is available on the BBC iPlayer. That episode of Four Thought was also chosen by the Radio Times as their Pick of the Day. Unbound have approached me about turning all of this into a book, and we've launched a page to fund it: https://unbound.com/books/mansplaining-masculinity

It’s interesting to realise that, in many ways, I’ve been writing this book (and working on my relationship with masculinity) for 18 years, ever since my first year at Lancaster University! 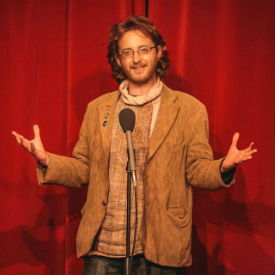 I've been writing this book for 18 years, ever since my first year at Lancaster