Matthew Lacoste (Theatre Studies, 2011, County) completed a 14 month cycle ride from the UK to Japan offering massage as a currency to gain him friends, food and board.

He says that he would not have had this skill to rely on during his trip had he not first been introduced to dance at Lancaster.

Brought up in Norfolk, he had been a member of the National Youth Theatre and a pupil at Gresham’s School co-educational boarding school, where he had a rich experience of music making and drama before university. Lancaster was always his first choice as he knew it had an excellent reputation for contemporary performance, as well as being in a semi-rural setting, with access to the city with bars and and a diverse body of students. He had also been very impressed by the welcome he received on the Open Day incorporating practical sessions as well as interviews.

He had done two gap years - as a Teaching Assistant in Australia and travelling - when he arrived at Lancaster, so was more confident than some of his contemporaries. The hands-on course structure was ideal for him; he says: “It was fantastic. We learned in class and then immediately put it into practice. We also benefited from many visiting performers who worked with us on productions. It was a real eye opener about how a professional company would run.”

The late Adrian Howells was a particular influence. Matthew worked with the transvestite actor who devised shows for the Avant-Garde Theatre course at Lancaster, on a production about desire and impulse, called Hideously Self-Indulgent. As a result of this working partnership Adrian recommended Matthew to director David Leddy for his production Sub Rosa at the Edinburgh Festival. This encouraged Matthew to work on another show after his finals - this time a dance performance with a fellow student - which gained them a five-star review in an American paper.

After graduation Matthew worked at the National Theatre and was taken on by several agencies as a children’s entertainer, which brought him a number of VIP clients, including the US ambassador, for whom he entertained guests at a July 4 celebration party.

When he came into contact with massage a year after leaving Lancaster he felt his dancing there had been the perfect preparation. He says: “It felt like a smooth transition. Just like dance, massage is a physical interplay between two people and one person has to yield in order to gain the benefits of the massage.”

Suddenly things fell into place for Matthew. He trained in Swedish massage, then decided that this could be his means of travelling the world. He designed a bicycle incorporating a massage couch, on which he made his way to Japan crossing three continents, 16 countries and covering 15,000 km - a trip he called 'The Touch Trail'.

Having experienced many different styles of massage he wanted to learn more about it and connect with people, raising money for the charity WaterAid on his journey.

During his journey he gave massages to many people old and young, in homes, by the road side, in villages and often received bed and board in exchange. It also gave him the opportunity to learn Thai massage and to experience Ayurvedic practices, as well as learning more about therapeutic touch in general. He would like to set up a resource for people wanting to know more about massage.

After his return from his travels, Matthew spent three months stripping and redecorating a caravan based in Norfolk to make it both a place to live and also to set up his massage practice. He works both there and in the homes of London clients. He has plans to give massage at festivals.

Matthew thrives on unpredictability, for which he says Lancaster has prepared him. He says: “It has given me a way of looking at life which is adaptive and allows me to work in different ways to achieve what I want.” 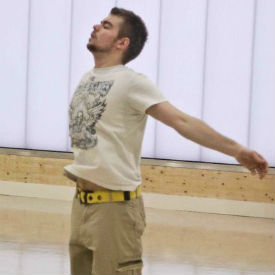