Paul Morrison (1995, History, Pendle) talks about his career and current role as Director of the UK Syrian resettlement programme for the Home Office.

In the days following September 2, 2015 when the pictures of Syrian toddler Aylan Al-Kurdi drowned on a Turkish beach swamped the media, highlighting the scale of the human suffering caused by the conflict, Paul Morrison and his wife wondered what they could do. Could they give their spare room to a refugee family or adopt an orphan? Paul knew that a coordinated response was required as well as individual acts of generosity. When David Cameron announced a few days later that the UK would resettle 20,000 Syrian refugees to the UK he realised his best contribution would be to use the skills that his high-flying Civil Service career gave him to help in setting up the UK response to the refugee crisis.

On the train home the evening after the then Prime Minister’s announcement he reflected that his own experience of working in immigration and visas, security matters, with vulnerable people and in international aid, might come in useful. He sent in an offer of help to his Permanent Secretary, with whatever programme might be set up and, to his surprise, was called in on his day off to be appointed Director of the UK Syrian resettlement programme.

Paul considers the job as a making sense of all his experience and learning to date: “Of all the jobs I have done it is the one with the most variety,” he says, as he describes travels to Lebanon and Jordan, engaging with ministers, charities and local UK communities. “The humanitarian challenge in Syria is huge, but the generous response of people and organisations across the UK has been overwhelming.’

The Syrian Resettlement Programme is a tri-lateral team incorporating staff from the Department for International Development and the Department for Communities and Local Government all of whom, like him, volunteered to staff the project. It works closely with local government on their offer of places for Syrian refugees and with non-governmental organisations, particularly the United Nations High Commission for Refugees and the International Organisation for Migration in the region.

The pace is intense, but Paul explains: “The whole point of my going into the Civil Service was to make a positive difference.”

Born and brought up in London, where he went to a north London comprehensive, he put Lancaster as his first choice of university because of its strong reputation for History, and his desire to study a respectable distance from home.

After a few weeks adapting to the reality of university life, he became absorbed into activity at Pendle, making varied friends outside his course of study who he has retained to this day - including an artist and a policeman. He joined sports clubs (including the American Football Club for which he did not last two matches), the film and the debating societies. His studies gripped him, particularly the lectures in Modern History by Dr Ruth Henig, who he encountered later while working at the Home Office, as a result of her political activities. The Lancaster course also allowed him to study ancient history alongside the more contemporary courses.

“It was a very flexible system and I never felt shackled to a particular area,” he says. “I had intellectual curiosity and it satisfied me, without ever making me feel dictated to.”

His intention after graduation was to become a lawyer, and he had a place at law school to do so. However he had doubts about his choice, so moved back to London and shared a house with fellow Lancaster graduates and began applying for jobs. An advert in the London Evening Standard gained him his first job within the Civil Service as a case worker in the Home Office, assessing victims of violent crime for compensation. A new world opened. He says: “The Civil Service is this vast ‘thing’ with all sorts of opportunities.” He took the exams for the Civil Service's Fast Stream and was successful on the second attempt. After that he had a series of jobs including Policy Adviser on youth offending. He became a Team Leader in the Northern Ireland Office, taking on a junior role in the middle of the negotiation of the Irish Peace Process.

A stint in the Immigration Office preceded a stint as the head of the unit that set up the Prevent strategy, to combat radicalisation. This introduced him to what he describes as a ‘fascinating world’ of counter-terrorism. He subsequently completed a two year secondment to the Foreign and Commonwealth Office before leading a 3,500 strong operational command which processes applications from people from overseas who want to work, study and live in the UK. All these positions have contributed insights invaluable to his current role.

His life is busy, but Paul is committed to trying to make the world a better place. This also motivates the voluntary work he also does with young people in his spare time.

His Lancaster history studies continue to support his demanding career, he explains: “History itself is a good degree to have in the Civil Service in order to structure an argument and recognise the conclusions you can draw from it.  Also, in leadership terms it has helped me to set decisions on some key policy areas in their historical context.” 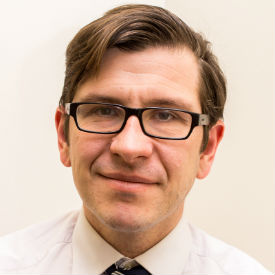 History is a good degree to have in the Civil Service