Filming and co-writing a feature-length biopic about Manchester music icon Morrissey is the kind of break for which most young writers would give their eye teeth.

William Thacker (pictured above) finds himself juggling that challenge at the same time as preparations begin for the launch of his second novel, Lingua Franca.

Speaking from Manchester during the filming of Steven, William (English Literature/ Creative Writing, 2008) acknowledges the confidence and self-assurance he gained as an undergraduate at Lancaster. He says: “If you were bright and had a passion for something, you didn’t have to explain yourself. It was about meeting other young people from all walks of life, and being free to be myself. And there were a lot of talented people to learn from.”

Discipline and hard work has got him to the point where he’s co-written Steven with director Mark Gill (Oscar-nominated for The Voorman Problem) with whom he also co-wrote the short film, Full Time, winner of the Best Film award at the 2014 Shanghai International Film Festival. All the while, he’s kept his feet securely grounded, combining his literary career and screenwriting with professional copywriting to pays the bills. “You can write for a living in various ways, just as a photographer may shoot weddings, or an actor may perform voiceover ads. I think what you love should be at the centre of your life.”

In part, this pragmatic attitude comes from having an artistic family background — his father, David Thacker is a theatre director and his mother,  Margot Leicester a stage actress. William had always wanted to write and saw leaving North London to attend a semi-rural university campus in the North West as a way of broadening his experience. He immediately appreciated the colleges, each with their own bar and social life. The Lancaster course also allowed him to combine English Literature with Creative Writing, with Politics as a subsidiary subject. The essence for him was the nurturing environment. He thrived on the course, particularly under the tutelage of Professor Paul Farley, of whom William says: “He created a positive atmosphere, which allowed the students to be themselves. I could experiment and I knew that that it was ok to fail. The approach wasn’t ‘one size fits all’. You were given the tools to help find your own voice.”

But perhaps the defining characteristic of William’s experience at Lancaster were the activities which had nothing to do with his course, including two years living off campus in the city centre. He worked at the Oxfam bookshop, marking up books in the stock room where he encountered memorable characters; he volunteered as the Assistant Editor of the student newspaper SCAN, dipped his toes into university radio and loved to explore the surrounding countryside.

Alongside a rich social life, and the demands of his studies, he still found time to write; the feedback and encouragement he received from Lancaster persuaded him to push his writing ambitions to a new level and to go to Manchester University to do an MA in Creative Writing. To pay the rent, he took a part-time job assisting disabled students, which brought him into contact with Mark Gill (then teaching Film at Salford University) and another job with an online news agency churning out 25 articles a day. “Looking back, it instilled a certain discipline and focus. I managed my time more effectively and of course, drank lots of coffee.”

The high-pressure job meant he would write his first novel, Charm Offensive, in the dead of night when the need for focus was absolute. Published by Legend Press, it told the story of a fallen politician who seeks to rebuild his life following an embarrassing scandal and was welcomed by the critics.

His second novel Lingua Franca, published in May 2016, is about a branding agency that renames towns under corporate sponsorship. It is set in Stella Artois (better known to most of us as Milton Keynes) and sees Barrow-in-Furness become Birdseye-in-Furness. Lancaster is one of the few places to escape William’s black comedy, “perhaps out of loyalty”, he explains.

William came up with the idea during a late-night chat session at Lancaster, where he would hash and re-hash ideas with fellow students from diverse backgrounds. He posited the dystopian idea (to a sceptical audience) that towns could one day sell their name in order to manage spiralling debts. His later experiences working as an agency copywriter would affirm his prediction. “PR, branding and marketing get a gentle bashing,” he says of the novel. “It’s a world stuffed with jargon and with special names for very simple things.”

Shooting the Morrissey film has the potential to open all sorts of doors for William, but for now he is  simply enjoying the moment. The cast includes Jessica Brown Findlay (Downton Abbey) and Jack Lowden (War and Peace) whom William describes as “an actor whose charm and depth brings something really exciting to the role”.

He adds: “We’re confident the story will connect with many people, not just Smiths fans.” 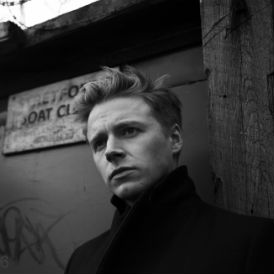 Jack Lowden as young Morrissey in the film 'Steven'

There were a lot of talented people to learn from