Computer scientists at Lancaster University, led by Professor Joe Finney, have supported the first major upgrade to the BBC micro:bit.

A pocket-sized computer helping to inspire more than 25 million children to learn digital creativity and computing skills, the BBC micro:bit will receive its first major updates since launching in 2016.

Available from mid-November 2020, it will now include a built-in speaker and microphone, enabling people to learn through sound and to get creative with it straight out-of-the-box. The hardware also includes a number of technical upgrades to ensure that in the future the device is an ideal tool for exploring, understanding and experimenting with artificial intelligence (AI) and machine learning (ML), as these technologies begin to transform the planet.

The new micro:bit continues to support all of the same features that teachers and students have come to love, and all the existing lessons and code for the original micro:bit will be compatible with the new device. In addition, as part of the Micro:bit Educational Foundation’s commitment to keeping the device as cost-effective and accessible as possible, the new device will be released in November at the same price point as the original.

Gareth Stockdale, CEO of the Micro:bit Educational Foundation, said: “The purpose of the micro:bit is to help children unlock their creative potential and learn how to shape the world around them. Learning coding and computational thinking can enhance their life chances in the 21st century. We have worked closely with our thriving community to make it even easier to get the most out of the device both inside and outside the classroom. Getting hands-on and experimenting with the micro:bit is critical to helping children better understand important technologies early in their development, and we aim to make this as fun, accessible and affordable as possible.”

BBC Director General, Tim Davie, said: “From the very beginning the BBC’s purpose has been to inform, educate and entertain – qualities which are all reflected in the micro:bit project.

“Since its launch through our Make it Digital campaign, it has helped transform digital skills and learning. I have no doubt the updated and upgraded micro:bit will drive further innovation and creativity, both in the UK and around the world.”

A key value of the not-for-profit Micro:bit Educational Foundation is partnership, and the new micro:bit is the result of a major collaboration between the Foundation, Arm, BBC, British Council, Farnell, IET, Microsoft, Lancaster University, Nominet, Nordic Semiconductor and NXP. The Foundation also announces a new partner in OKdo, who alongside Farnell will be a global distributor of the micro:bit.

Lancaster University’s Professor Joe Finney led the design and development of the runtime software, which acts like the operating system for the micro:bit on both the original device as well as this latest upgrade. He also serves as part of the hardware advisory committee for the micro:bit.

He said: “The micro:bit has had an astonishing global impact over the past four years, helping tens of millions of children and teachers across the world to embrace digital technology as part of the creative process. Moreover, this unique approach greatly encourages increased diversity in Computer Science, by reflecting the accessible and creative nature of the discipline.

“I’m excited to support the micro:bit foundation as this new upgraded micro:bit opens up yet more avenues for creative education, especially around the field of machine learning.”

Lancaster University is also working closely with teachers to support the introduction of computing into the national curriculum in Primary Schools.

The micro:bit’s new features will enable students to take their creativity to new levels. With the built-in speaker they can compose music, give projects a voice and personality or build interactive, motion-sensitive instruments. The microphone also allows the device to respond to sound – clap to control your creations or make a disco light that dances along in time with the music.

The micro:bit hardware is now powerful enough to run machine learning systems, and the Foundation will support this with new resources in the future. As the community spends more time with the device and explores the capabilities of the hardware, they can take advantage of exciting ML and AI possibilities through applications that respond to advanced patterns of sound, voice, motion or light.

For example, an early experiment from Edge Impulse created a voice-activated micro:bit by training the device to recognise custom keywords. Other early experiments with Espruino and Tensorflow Lite showed it is possible to train a machine learning model for micro:bits to recognise gestures. This meant it was possible to control projects by flicking your wrist, tilting your hand and jumping up and down.

The Foundation and its community also recognised that as children grow-up in an increasingly automated and connected world, it is a major priority to enable them to understand the potential, and the risks, of emerging technologies by getting hands-on.

The updated micro:bit has been designed in consultation with teachers and the global community of micro:bit fans to ensure continuity and simplicity in teaching with the latest device. Making sound and music is one of the first things children and teachers do to get truly creative with technology in the classroom, so the addition of a built-in speaker was a natural next step.

With an estimated 25 million children learning with the micro:bit in over 60 countries, the pocket-sized computer continues to be truly transformational.

The micro:bit launched in the UK in 2016 by giving free devices to every year 7 student as part of BBC’s Make it Digital, an unprecedented and highly ambitious project. It is now not only being used in most secondary schools to teach 11 – 14-year olds but is also hugely popular with primary school teachers for 8 – 11-year olds. In addition:

A key aim of the Micro:bit Educational Foundation was to bring the benefits of the micro:bit to children and teachers around the globe, and is being used in projects across Africa, Asia, Australasia, the Americas and Europe. Examples include:

·      Denmark: the Ultra:bit programme was launched in 2018 by the Danish national broadcaster, DR. The programme has reached 90% of schools and over 70,000 students across three school year groups aged 11 – 15.

·      Singapore: the IMDA’s (Infocomm Media Development Authority) Digital Maker Programme began in 2017 and has offered the micro:bit ever since. Over 100,000 students signed up for the initial programme, which benefitted 65% of all schools in the country and it has expanded to the remaining schools over the past few years. 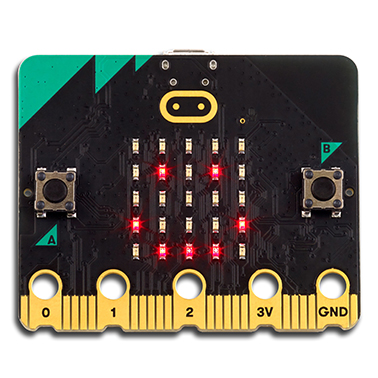 The new speaker is a 9mm magnetic sounder and the microphone is a Knowles MEMS sensor. The micro:bit also features a dedicated ‘microphone operating’ LED to make it clear when the microphone is on and sensing sound. This allows teachers to engage with students around privacy and the impact of listening devices.

The new BBC micro:bit uses a Nordic nRF52833 as the main microprocessor, which has 512kB of flash storage, double what is available on the original micro:bit. It also has 128kb of RAM, eight times that of the original micro:bit, and runs at 64MHz, up from 16MHz. These updates make it possible to support AI and machine earning applications, which the Foundation will support in future.

The device is capable of lower power consumption, allowing for long-running data logging, for example, and a power-off mode that also serves to mute the device without unplugging it.

The micro:bit logo is now a capacitive touch sensor, and the pins on the Edge Connector can also be used to sense touch this way, like a phone screen, without completing a circuit.

The software, schematic and BOM continues to be open source, as it was for the original micro:bit and will be released as the device becomes available.

I’m excited to support the micro:bit foundation as this new upgraded micro:bit opens up yet more avenues for creative education, especially around the field of machine learning.