Global Garbage examines the ways in which garbage, in its diverse forms, is being produced, managed, experienced, imagined, circulated, concealed and aestheticized in contemporary urban environments and across different creative and cultural practices.

The book explores the increasingly complex relationships between globalization and garbage in locations such as Beirut, Detroit, Hong Kong, London, Los Angeles, Manchester, Naples, Paris, Rio De Janeiro and Tehran. In particular, the book examines how, and under what conditions, contemporary imaginaries of excess, waste and abandonment perpetuate - but also sometimes counter - the imbalances of power that are frequently associated with the global metropolitan condition. This interdisciplinary collection will appeal to the fields of anthropology, architecture, film and media studies, geography, urban studies, sociology, and cultural analysis.

What was the most surprising part of this project?

Surprising for me was to discover in how many different ways contemporary scholars and artists engage with garbage. For example, urban planning and environmental studies research tends to frame garbage as a risk and object of management practices. In this view, garbage is a substance that needs to be avoided, removed and/or recycled as efficiently as possible. In contrast, some branches of anthropology treat garbage as a key to the study of our present civilisation. In this view, garbage acts as a means of de-familiarization. It makes familiar objects newly strange and therefore allows us to take a somewhat distancing, critical perspective on taken-for-granted practices of economic production and exchange, as well as established systems of cultural classification.  Artistic engagements with garbage – such as H.A. Schult’s Trash People, Francisco de Pájaro’s Art is Trash  installations or Daniel Canogar’s Other Geologies – are interesting because they highlight how garbage can adopt different cultural meanings. Depending on how it is assembled, framed and aestheticized, garbage can repel or appeal to our senses, it can strike us as individual waste product or a global mass problem – or both. Philosophical approaches to the study of garbage tend to think this further by asking what qualifies garbage beyond the fact that it constitutes the by-product of human economic and/or classificatory systems. What is the nature of garbage? How can it be known? Following these questions, the study of garbage can reveal something about the limits of established knowledge and meaning-making processes. Finally, contemporary urban studies and geography offer very surprising perspectives on what may be described as ‘spatial garbage’. In our Global Garbage book, we use this term to refer to the ruined, neglected and/or devalued spaces of urban planning and development. Spatial garbage has received much critical attention in contemporary urban theory and visual culture. Yves Marchand and Romain Meffre’s famous photographs of The Ruins of Detroit are an example of this tendency.

Of course, these various ways of engaging with garbage overlap, but there are also considerable disconnections. While, for some scholars, garbage is mainly a severe problem and global risk, others consider it the by-product of culture. While some point out the socio-environment inequalities of global waste distribution, others find it chic to transform waste into art and ruins into touristic sights. Our goal in Global Garbage is to bring these different perspectives into a dialogue that is hopefully both productive and critical.

What follow-up work are you developing?

The Global Garbage project has deepened my interest in the interrelation between cities, globalisation, risk and creativity. At the moment, I am particularly interested in urban experiments with alternative strategies of re-articulating, re-balancing and re-directing global capital, energy and material flows – such as urban zero waste/carbon initiatives, circular economy projects and the slow movement/activism.

Where can people find out more? (e.g. social media, news, etc. as well as links to purchase)

Christoph Lindner and I have recently tried to connect some of our arguments from Global Garbage to current climate change debates. This thinking developed from a particular experience. Shortly after the publication of Global Garbage, we had been invited to talk about our book as part of a public debate on garbage and the future of cities, organized by the Forum Internationale Wissenschaft at the University of Bonn. The event took place shortly after the United Nations Climate Change Conference in Paris and – in light of this event – we were asked why, when talking about global garbage, we were not also talking about climate change. We tried to develop our response to this question in a blog post, which is available on Routledge’s Environment and Sustainability Blog.

A short summary (in German) and ‘Storify’ of the event in Bonn is available here. 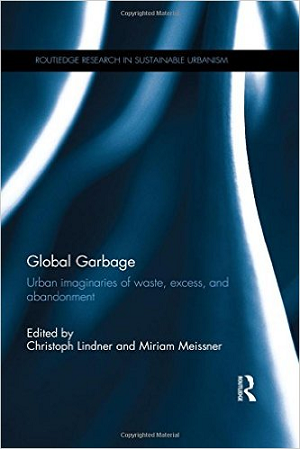