Over the last twenty years, with colleagues Tony Guénault, Ian Bradley and Shaun Fisher we have built up a microkelvin facility at Lancaster based on the use of the most advanced techniques available at the time of construction. This facility has been rather successful cryogenically and the low temperature capability has given us unique access to several new fields. Of the subjects which are of interest in the microkelvin regime 3He remains the most rewarding. Both isotopes of helium are quantum fluids and solids, and as well as being extremely interesting in their own right, continue to provide simple systems for the testing of a wide range of models of condensed matter behaviour. Superfluid 3He is especially fascinating since it is the only p-wave paired superfluid accessible to measurement. However, since the transition temperature for superfluidity is not reached until the 1 to 3 milliKelvin temperature range, any experimental study must rely on considerable cryogenic engineering.

With our very low temperatures we have been able to study superfluid 3He essentially in the zero temperature limit. As a consequence of the superfluid energy gap, the density of excitations (quasiparticles) in the low temperature B-phase superfluid falls off very rapidly with temperature. At the lowest temperatures we can reach, the normal fluid fraction has fallen to 1 in a million. This means that the mean free path for quasiparticle-quasiparticle scattering becomes very long (of the order of kilometres) and the quasiparticles behave as a gas of non-interacting ballistic particles. It is the study of the behaviour of this quite amazing excitation gas for which the Lancaster group has become most known.

We have been able to elucidate the dynamical behaviour of a gas of quasiparticles and with the black-body radiator methods developed by Shaun Fisher we have been able to use the superfluid 3He excitation gas as a sensitive particle detector and latterly in an experiment in the CRTBT laboratory in Grenoble the methods have been used to simulate the creation of cosmic strings in the early Universe.

Superfluid 3He has many other interesting properties. One which is unique is the magnetic aspects of the superfluid. Since the nuclei in the cooper pairs are associated with a nuclear momewnt one component of the superfluid wavefunction is concerned with the magnitude and direction of this magnetization. However, magnetization is something we can manipulate from outside, for example by NMR. The Moscow group of Borovik-Romanov, Bunkov, Dmitriev and Mukharskiy were the first to recognise the unique features of superfluid magnetism. If we set up a gradient in the direction of the magnetization, which we can do by applying an NMR pulse to the liquid in a magnetic field gradient when the magnetization will precess at differential rates depending on position and accordingly the direction of the magnetization will wind up the wave function. A gradient applied to a superfluid wavefunction will be accompanied by a superflow to cancel it. In this case a spin-supercurrent. This feedback mechanism leads to a number of interesting precessing domain structures. We began studying these properties after being introduced to the subject of superfluid NMR by Yuri Bunkov. Recently we have been able to see NMR precession which persists for periods of many minutes, very close to being "persistent" magnetic behaviour.

This work has all been made very much at the limit of what is cryogenically possible. To keep up with current advances we are just commissioning a new microkelvin facility which has a 1.8 mK dilution refrigerator to provide an advanced testbed for our experiments well into the next millennium. 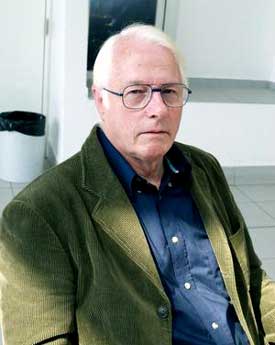